My approach to the European issue is not an original one. Europe was divided into two occupation areas after the Second World War by the two winning superpowers, the USSR and the US.The Soviet empire collapsed. The US defeated the Cold War, and the winner imposed its conditions for the capitulation to the countries of the former communist camp.In an apparently strange way, for the first time in history, the defeated countries gladly accepted the conditions of surrender as a charity, as a liberation.The primary cause of this naive jubilation lies in the loss of the cognitive, cultural, civilization war of the Soviet camp long before the collapse of communism.Western mass culture, the consumer society’s magnetism, the fascination exercised by the capitalist model as a whole has conquered the collective mentality in the East. That is, the communist regimes have not been prepared to resist a non-military war that has taken place for decades.It followed the soft occupation of countries of the former Soviet zone of influence.

Therefore, in order for the economic, political and military occupation to succeed (for the countries absorbed in the NATO bloc), in the initial phase it was necessary to perform a psychological, intellectual, civilization occupation.The process of expanding the globalized West to Eastern Europe has been called democratization, transition to the market economy, and other components of social engineering that shaped the political and economic model of our countries.Therefore, our countries have become societies that have imitated, parodied, copied the western model. And being aware of the position of imitators, the new political elites in the ex-communist space took over completely, without any discernment, all the directives given by the power centers of the global oligarchy: the US, the IMF, the World Bank, the European Union, the WTO, etc.

But after almost three decades of transition from the communist to the liberal model, the economic and social situation in our societies has catastrophically degraded.These failures have been explained for a long time by the incompetence and corruption of governments that have succeeded over the past decades, which have been unable to implement all the reforms dictated by Washington and Brussels. This was the message sent by the emissaries of the Western financial and political organizations, which were repeated by the local politicians and the media.

But time passed, elections brought other political actors to the top of state hierarchies, but the social-economic situation continued to worsen. And then, slowly, some of us began to recover from the state of intellectual and volitional trance. Intellectuals with deeply patriotic feelings insisted on deepening the knowledge of the essence of our problems. Thus, naturally, many of the former anticommunists, including myself, have become the new dissidents who unleash the new type of imperialism, an imperialism usually associated with the US and with the European bureaucracy in Brussels, but which is in fact an extraterritorial one, even though most members of the global elite are based in America.

The discovery of the truth that the US is actually a captured state, where the power is usurped by the banksters and the military-industrial complex, of the corporatocracy as a non-state actor, more powerful than states, and subordinated them for their own financial interests: this was like a real shock for us. Today the idea that just as the Russian people were the first victim of communism, so the American people is the first victim of globalism has already become a common one. Yet, in order to regain national sovereignty, European countries naturally tend to emerge from the American protectorate. And the rise of populist political parties on our continent is the most eloquent proof of this movement of national emancipation. In this regard, I would like to emphasize an extremely sensitive difference of approach between intellectuals and political parties in the West and East of our continent. While the avant-garde of Western European dissidents advocates strongly the end of the US military occupation and the liquidation of NATO, and this message is increasingly verbalized by some anti-system political parties, eastern European countries are more reluctant.

I find it particularly important for all those who really want to restore the unity of our continent to seriously treat the difference of perception over Russia in the West and East of our continent. While Western nationalists are habitually showing a special sympathy for Russia, eastern nationalists regard their great neighbor with more caution, and often with animosity. The historical causes for these attitudes, ranging from hatred and hostility to restraint and circumspection, are well known. They are especially related to the tragic experience of our peoples in the twentieth century, when Communism was imposed by Soviet Russia (or the USSR, which is the same thing). The former Soviet republics and Warsaw Pact countries have inherited profound psychological traumas as a result of the dictatorship and repression of the communist regime. People in these countries usually say, “The Russians have occupied us, the Russians have terrorized us, the Russians deported us.”

This tragic historical confusion between the communist regime and the Russian people is the main subject of manipulation, used by the Atlanticist networks of influence. In such a favorable psychological climate, the exploitation of the subject of “Russian danger” and the nourish of Russophobia became a very easy task for professionals of social engineering. The concept launched by American neoconservatives (see the memorable speech of Donald Rumsfeld in 2003) about Old Europe and New Europe  is part of the same strategy. If Western European partners of American strategists are not so motivating to manifest sufficient level of anti-Russian attitude, Eastern Europeans are always ready to play the game which is ordered from Washington. This issue is more or less familiar for many people.

But I would like to elaborate further on this idea. I have repeatedly affirmed that the common geopolitical opponents of all European peoples, who are based in the US, will be successful in instigating and exacerbating such a type of reactions by using a classical trick named phishing or management of perceptions and behavioruntil Russia itself will defuse this ideological bomb.If we start from the premise that the principle ”Know your enemy” is one familiar to us, and our geopolitical adversary is unequivocally identified, now we should look at our Russian friends and allies without whom the idea of continental unity would be an illusion. Once again, as the Russian philosopher Ivan Ilyn said, “The Soviet Union is not Russia.” This should be the core element of speech that the peoples of Eastern Europe expect from the current leadership in Moscow. In other words, as long as Russia’s current leadership will keep an ambiguous attitude toward Soviet past and will not want to categorically distance themselves from the USSR crimes committed against all the peoples who were under its domination, the technique of our artificial division will work impeccably. We need historical reconciliation between the Russian people and the other peoples in the ex-communist area. And the initiative could be emanating from Moscow. My call to our Russian friends is to use the principle “Disarm your enemy!” Take from them their perverse argumentation which empoisons our relations.

In recent years, financial, speculative, virtual, non-productive capitalism has been largely criticized. All these criticisms are perfectly valid and I fully adhere to them. As I enthusiastically adhere to the resurrection of the European peoples under the flag of populism. I am also the advocate of economic protectionism, the restoration of the national sovereignty of the European peoples, which implies at least the disappearance of NATO and the EU. But I am equally close to those intellectuals who believe that liberalism is moving towards its historic end. The triumphal march of the so-called French Revolution ends in a lamentable manner. And if we agree that the era of all political theories that have accompanied Modernity, communism, fascism, (nazism) and even liberalism are overcome, then there is no more pressing task than developing the future model of organizing our societies. The first fundamental principle for our efforts could be based on following idea: Any society in which there is at least one value which is higher than money is better than capitalism.

I personally advocate for a post-liberal, post-capitalist, post-American Europe that builds its future based on Tradition, Christianity, Family, the millennial civilization of our continent under the conditions of post-modernity. I am convinced that our economic, political and military power, even if it would grow tenfold, and even if we succeed in overcoming the dividing lines that separate us today, will be extremely fragile without our spiritual rebirth.Europe does not exist or at least is a monstrous caricature without Christ in the center of the world, in the heart of our continent, in the soul of every European. The motto ”Nihil sine Deo” (”Nothing without God”) is a nobility blazon of our civilization. 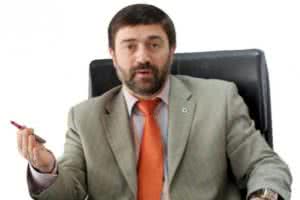 Iurie Roșca is a politician, journalist, author, editor and translator.He is now the president of People’s University, which is a school of political leadership, an international think-tank and printing house.