Change is the only constant. After a struggle for supremacy in geopolitical and geo-economical spheres, now technological realms have also been contested among superpowers. The Fourth Industrial Revolution is at the verge of breaking out and it is expected that this stage of modernization will tug the very fabric of society and will alter the way individuals interact with each other and world at large. Ongoing industrial innovation will act as a modus operandi to transform global economies, communities, and politics.

The world is in stern need of a modern global architecture before the fourth industrial revolution starts encroaching on us. That is why a trade tussle emerged on statist lines among all major economic stakeholders of the international economy, especially among those having a larger share in business with the United States. The US President Donald Trump opted a pre-emptive approach and imposed tariffs and nuisance in global economies. Eminent journalist, Bob Woodward highlighted the fact in his book ‘FEAR’ that USA’s protectionist elements are far-greater than ever before and such actions will hinder economic peace with traditional allies or trade partners. Trump’s tariff imposition on China and renegotiation of NAFTA and Free Trade Agreements with EU leaves no doubt about Woodward’s projections. Another famous Nico Colchester prize-winner financial journalist, James Politi of Financial Times referred exchange of tariff brawls between USA and China as “protectionist firepower” by Trump administration aiming against China. To cut short, current trade tariff discourse is in order to contain China in geopolitical, economic and technological leadership.

An ongoing trade war is economic intimidation and coercion by the USA towards China to redevise their trade agreements and get more favorable terms for the country, which will also advance Trump’s populist mantra of America First. Trade tariffs were imposed as a consequence for not responding the sheer allegations on Chinese companies by US administration of unprecedented level of larceny and infringement upon intellectual property rights. US Politicians claim that industrial migration and capital flight from the US to China was the reason of unemployment in the USA, but economists condemned the long-term policies like reliance on imports and not saving much for the future.

China’s rise is perceived as a threat to hegemonic stability, thus an influx of uncertainty is stirring in the realm of international political economies. This rise is analogous to the Thucydides trap and also depict similar characteristics as of power transition theory. But the fault line of this predicament lies in the technological advancement of China by virtue of US private enterprises and regional economic connectivity ventures of the country. In short, it is a feud between the two leading economic powers to overhaul world trading practice (its terms and conditions) coupling with technology and knowledge-based economy with an intent to hedge and wedge each other being the contenders of global hegemony.

Both economic powers, China and USA have been in a state of economic tug of war since June 2018. To resolve his sticky situation, Trump administration imposed 25 percent import tax on $50 billion worth of products of Chinese origin in order to overcome the trade deficit between both economic giants. China countered this move by levying duties on the produce of USA and more than three rounds of tariffs worth $250 billion were exchanged among both parties, in addition, both parties threatened with each other with penalties of $267 billion. However, both countries had annual trade relations of $710.4 billion in 2017 and China is ranked as the third largest export market for the USA.

The Chinese government was alleged for backing their private companies by injecting billions of dollars every year and termed as state-owned private enterprises by several journalists and newspapers. In addition, Chinese companies were suspected to violate patent rights especially the ones related to modern technology and Chinese authorities for restricting foreign companies to access their markets freely. China also announced its strategy named ‘Made in China 2025’ which implies that majority of end-user products will be developed by China in near-term while it is also a challenging situation for the USA for being a techno-center of the world. Vision 2025 asserts that China will be a front-runner in modern technologies like Artificial Intelligence and Biotechnology in the respective year.

While campaigning for elections, Republican President of USA, Donald Trump also proclaimed that Chinese development is equivalent to ‘rape’ and his administration will levy 45 percent tariffs on total imports from China. Formerly China had been under tariff regime of USA on products worth of $50 billion annually and President-Elect also threatened Chinese government to take a radical stance and impose further 25 percent taxes on January 1st, 2019 on products worth $200 billion. Chinese government retaliated this move by imposing tariffs worth $60 billion despite economic coercion from the US government of striking further duties on all products of Chinese origin.

“The United States has a problem, but it’s not with China. Predicament lies in America because they saved too little, and borrowed and imported too much”.

USA and China are heading towards a war which no one wants at this point in time. In this modern era, the US and China must see ahead of time and resolve their bilateral relations which is a cause of disturbance in the international economic order. To do so there is a need to establish new norms of trading and economics which incorporate prevalent treaties and meet the requirement of the 21st century.  To serve the purpose rules should be developed to cater the technology related matters in international trading practices.

Current global situation of power transition and hegemon desiring stability depict the same case as of Thucydides trap which is an outcome of structural pressures spiraling from an emerging power challenge the ruling one. Although this theory is ancient but very relevant to the on-going trade-brawls of China and USA, a case where the leadership of both countries sings hymns of making their country great again. This conflict has no resolution other than either party accepts the dominance of other whereas in this case China is not going to cap and roll their economic endeavors, and the US will also not concur to Chinese supremacy in Pacific, cyberspace and external space. There are certain stern measures which competing economies will have to take in order or else it could be an all-out war. 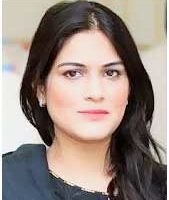 Dhanak Fatima is a Foreign Policy Analyst and a contributing writer for international newspapers such as China Daily, Modern Diplomacy, EurAsiaAz and Eurasian Defence. She holds a Master of Philosophy (M.Phil.) in Governance and Public Policy. Her areas of research incorporate regional as well as extra regional subjects especially United States, Russia, China and Central Asian Republics.