Since the turbulence over the amendment bill last June, the “Hong Kong independence” organizations and radical localists have been colluding with external forces to create frequent riots in Hong Kong.

Since the turbulence over the amendment bill last June, the “Hong Kong independence” organizations and radical localists have been colluding with external forces to create frequent riots in Hong Kong. And the situation has become more and more intense, posing an increasing threat to China’s national security.

In response to this situation, in late May, the National People’s Congress, China’s highest legislative body, passed a “Decision on Establishing and Improving the Legal System and Enforcement Mechanisms for the Hong Kong Special Administrative Region to Safeguard National Security”, which was warmly supported by the Chinese people, including Hong Kong compatriots.

China’s legislation to safeguard its own national security is absolutely justified, and is purely China’s internal affair. However, a few countries in the world turn a blind eye to the will of the Chinese people, and make unwarranted accusations against the decision. Very few countries even threat to impose sanctions on China.

China had clearly pointed out to the British side in the negotiation that neither the issue of sovereignty was negotiable, nor was the issue of jurisdiction; and the implementation of the policies were purely internal affairs of China, which had nothing to do with the British side. In fact, the policies declared by the Chinese side had been incorporated into the Basic Law of the HKSAR and had been comprehensively and effectively implemented through laws. There is no single word—in the Basic Law or the Joint Declaration and its annexes—to deprive or weaken the power and responsibility of the Central Government to maintain national security in the HKSAR. It is totally groundless to say that China violates the international agreement.

The “supervision” of the implementation of the Joint Declaration claimed by the UK, however, is the typical mentality of colonialism. Human history has entered the 21st century. The era when one country could wantonly interfere in the internal affairs of other countries is gone for ever. However, some countries still attempt to interfere in China’s Hong Kong affairs by misinterpreting the Joint Declaration.

This is severely against basic principles of international law and norms governing international relations, including mutual respect for sovereignty and territorial integrity, and non-interference in internal affairs. The UK should deeply rethink its words and deeds, and stop interfering in Hong Kong affairs. Instead, it should listen to the just appeal of most countries in the world, implement the advisory opinion delivered by the International Court of Justice on the Chagos Islands in 2019 as soon as possible, and return the Chagos Islands to Mauritius at an early date to complete the decolonization of Mauritius.

The second argument is that the legislative power for national security has been granted to the HKSAR, so it is in the purview of the HKSAR’s autonomy, and is therefore no longer within the central authority. However, this is purely misleading. National security is closely related to sovereignty and territorial integrity. The Central Government is responsible for upholding national security, as is the case in any country.

This is basic common sense which is self-evident. This has also been reflected in the existing laws of HKSAR. For example, according to the 1997 Mutual Legal Assistance in Criminal Matters Ordinance of the HKSAR, the HKSAR should give notice to the Central Government in relation to every Hong Kong requests and external requests on mutual legal assistance in criminal matters. On the ground that “the interests of China in matters of sovereignty, security or public order would be significantly affected” by such mutual legal assistance, the Central Government has the power to issue instructions which the government of HKSAR should comply with.

It must be made clear that the Article 23 of the Basic Law — stating that Hong Kong shall enact laws on its own to prohibit seven types of acts that endanger national security — is a constitutional duty of HKSAR, instead of an exclusive power. The Central Government’s developing national security legislation and applying it to the HKSAR is an inherent power of the top legislature in a sovereign country and is fully in compliance with the Constitution of China and the Basic Law. In the 23 years since the return of Hong Kong, due to the obstruction of internal and external anti-China forces, HKSAR has not completed the legislative task stipulated in Article 23 of the Basic Law.

In fact, Hong Kong has become a rare case in the world without any national security legislation, which is extremely abnormal and must not continue any more. It is against this background that the National People’s Congress decisively exercised its legislative power and fill up the loophole at this critical and urgent time. There is no conflict between the NPC’s legislation and Article 23 of the Basic Law, which means HKSAR still needs to fulfill its duty of local legislation following the Basic Law in order to cooperate with national law to form a institutional assurance that effectively maintain national security in the Hong Kong SAR.

The third argument they raise is that the legislation by Beijing and the establishment of a national security agency in Hong Kong will restrict Hong Kong’s human rights and freedom, impair Hong Kong’s high degree of autonomy, and lead to “One Country, One System”. This worry is completely unnecessary. First, the implementation of “One Country, Two Systems”, “Hong Kong people ruling Hong Kong”, and a high degree of autonomy are basic national policies independently chosen by China, not imposed by any foreign country.

No other country, more than China itself, wants Hong Kong to maintain long-term prosperity and stability and it hopes that “One Country, Two Systems” will be stable and far-reaching.

The enactment of Hong Kong-related national security legislation will only improve the “One Country, Two Systems” system and will not affect its capitalist system or independent judicial power, or derogate the rights and freedom of expression, press and assembly enjoyed by Hong Kong residents according to law. Second, the Decision of National People’s Congress pointed out clearly that the Hong Kong-related national security legislation targets only very few acts that seriously endanger national security, such as secession, subversion against the Central People’s Government, organizing and carrying out terrorist activities and foreign interventions in affairs of the Hong Kong SAR. After all, only a handful of people may engage in these activities. For other people who do not, there is nothing to worry about.

The situation in Hong Kong in the past year has fully demonstrated that the prosperity and stability of Hong Kong cannot be achieved without maintenance of national security. Some thugs now openly advocate “Hong Kong independence”, smash and burn everywhere, indiscriminately attack innocent civilians, destroy public facilities, challenge rule-based governance. Violent terrorist activities continue to escalate, and illegal interference by external forces is more emboldened, which have seriously threatened the lives and property of residents, and greatly affected investors’ confidence in Hong Kong.

The main reason for these chaos is the weak foundation of national security. Therefore, taking the NPC legislation as an opportunity to improve Hong Kong’s legal system and enforcement mechanism for safeguarding national security will better protect the rights and freedom enjoyed by Hong Kong residents according to law, better protect the high degree of autonomy of Hong Kong, so that to create conditions to solve deep-seated problems such as the economy and livelihood and create a more stable and reliable rule of law and business environment. And only under this premise can the concern of the business community about “violent terrorist activities”,“mutual destruction” and other chaos be eliminated, so that to create more favorable conditions for people from abroad who intend to work, invest, and live in Hong Kong.

It seems that for certain country intending to use Hong Kong as a bridgehead to contain, infiltrate and destroy China, it is good to keep Hong Kong “undefended” in national security so that they can do whatever they want. And that is why they react so strongly toward Chinese legislation.

However, maintaining national security concerns China’s core interests and is a just and necessary move by a sovereign country, therefore no room for compromise.

No matter under what pressure, the Chinese government remains unwavering in its determination to safeguard national sovereignty, security and development interests, implement “One Country, Two Systems” policy, and oppose external interference in Hong Kong affairs.

We have also noticed that not all countries that have expressed concerns on China’s above-mentioned legislation intend to endanger China’s national security. Some are misled and coerced. I would suggest these countries be calm and not parrot others to rush into conclusions, get blinded by ideological prejudice, or line up with camps and ignore the truth and facts. In the next step, the Chinese legislature will start drafting and formulating specific national security laws concerning Hong Kong in accordance with the Decision of the National People’s Congress. In the process, it will also consult the people of different sectors in Hong Kong in an appropriate manner.

It is hoped that all countries could adopt an objective and fair approach, understand, respect and support the efforts of the Chinese government to maintain national security, and not interfere in China’s internal affairs in any way. 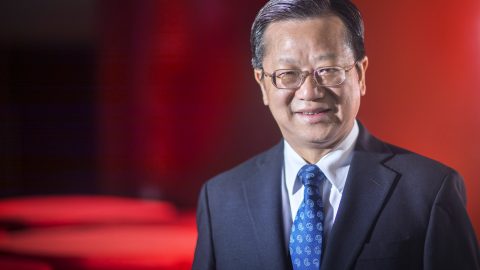 H.E. Dr. Xu Hong, Ambassador of the People’s Republic of China to The Netherlands