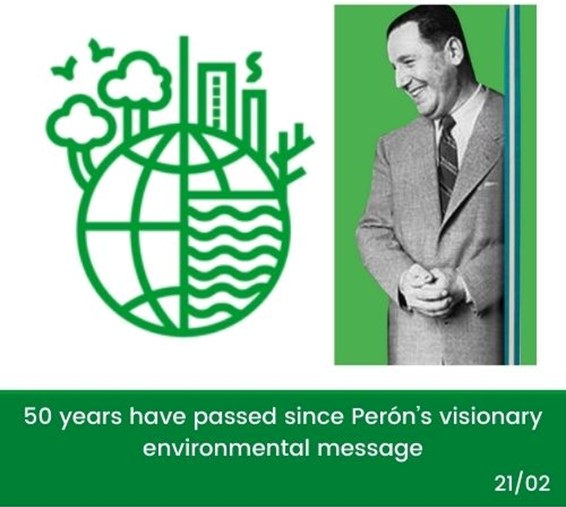 On February 21, 1972 Juan Domingo Perón announced the publication of his letter known as “Mensaje Ambiental a los pueblos y Gobiernos del Mundo” (Environmental Message to the peoples and Governments of the World) pioneering meditation on the need for the implementation of ecological public policies.

In such a letter addressed to the Scientific Conference of the United Nations in Stockholm on environment, Peron warned about the suicidal march that the humanity would have taken through the pollution of the environment and the biosphere, the squandering of natural resources, demographic pressure, and consumer waste by the “First World” countries, and it he also called for the reversal of this situation through joint international action.

This historical document reveals the validity of the thinking and strategic vision of the Argentine leader as an analyst of global trends. Because of this, Perón became a pioneer leader when discussing the environmental issue with a perspective different from that of the hegemonic countries.

As we observe the meditations of the Argentine leader are more valid than ever:

Recently, and through multiple platforms, the Argentine Secretary of Strategic Affairs, Gustavo Beliz, has discussed the need to establish a “Green New Bretton Woods”, which would address the urgency of the reconfiguration of the global financial architecture as well as the coordination of environmental policies. A new paradigm from the multilateral financial institutions that promotes financial relief tools, such as the exchange of external debt for climate action, especially for middle and low income countries, such measures would make possible the achievement of Ecological Social Justice, in which human and sustainable development would be inseparable.

Perón’s ecological reflection was also echoed in Pope Francis’ encyclical “Laudato Si”, a call to think and develop holistic actions that will reverse the deterioration of our Common Home.