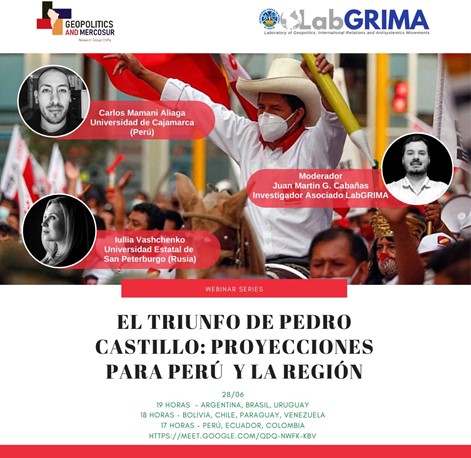 Last Monday, June 28, the Laboratory of Geopolitics, International Relations and Anti-Systemic Movements (LabGRIMA) of the Federal University of Pelotas (Brazil) held out the webinar and debate “The Triumph of Pedro Castillo: Prospects for Peru and the Region“.

In this online event experts made a conjunctural analysis on Peruvian politics and its regional implications with the aim to foresight possible future scenarios after the triumph of Pedro Castillo on June 6 in the Peruvian presidential elections (by a very small margin), with the subsequent legal requests by his rival in the presidential ballotage Keiko Fujimori to challenge the final results (so far, the Peruvian electoral justice has not expressed a final declaration recognizing Pedro Castillo as elected president).

the presentations by the speakers

Carlos Mamani Aliga, sociologist (by the University of Cajamarca) and Peruvian political analyst began as a speaker, pointing out basic considerations about the Peruvian presidential ballotage (Fujimori vs. Castillo), the already surprising fact that Pedro Castillo found a way to get to that final instance, his success among the electorate based on his political image as an “outsider”: a humble and charismatic provincial school teacher, with a strong support in the country’s Hinterland.

Another main consideration of his intervention was the analysis of the process of his recognition as elected official president, a process that is currently delayed by Fujimorismo.

As Mamani pointed out, although the competent electoral institution, the National Office of Electoral Processes (ONPE) has already expressed regarding to the results of the elections, the recognition of Castillo as the new Peruvian president at this time is conditioned by the declaration of the National Elections Jury (JNE: the entity in charge of recognizing the elected president of Peru) a recognition procedure that is being delayed by Keiko Fujimori who has presented a series of legal claims (a true legal war, lawfare) to prevent the recognition of Castillo as the new president.

This is part of the Fujimorismo strategy (which Mamani remarked is very prone to these kind of practices) to prevent Pedro Castillo from being appointed new president, and through the dilation of the process of presidential recognition, wear and condition from the beginning a future new government by Pedro Castillo or anyone else.

To conclude, Mamani made a prospective vision of the possible scenarios on the dilation of the recognition of Castillo as the new Peruvian president, pointing out the following scenarios:

Pedro Castillo is recognized by the JNE as president, and therefore he would assume command of the government but having a rather complex panorama of challenges:

In case Castillo won t be recognized by the JNE, he pointed out 2 other scenarios:

At the end of his presentation the Peruvian analyst expressed his concern that in the event of a possible “progressist return” (such as the trend of the South-American Pink Tide in the mids-2000s) of progressists governments, with social, popular, nationalist reform agendas, those political forces won´t change the logic of their former government agendas, committing the same mistakes that caused the end of their political cycle.

Mamani summarized those mistakes, in the ones made by those governments that realized social transformations considered “progressives” or progresists, but that did not structurally changed the economy matrix of those countries (primary-extractivist) and for this reason their social structure and their condition of dependency within the World-System were not modified.

PhD and specialist in Latin American studies by the St.Petersburg State University Iuliia Vaschenko made a description of the regional scenario in South America that Pedro Castillo will have to face if he is finally declared president by the electoral authorities.

This description began with a summary of the regional integration processes in South America that culminated in the creation of UNASUR, whose promoters were the so-called progresists governments of the first decade of the 2000s, which despite many errors, had certain achievements in social aspects and made progress in the conformation of a continental pole for the Patria Grande. Albeit for different reasons, both due to the errors of such governments and adverse global situations (such as the end of the super cycle of commodities in the first decade of the 2000s) that progresist cycle was reversed by conservative and neoliberal governments.

For Vaschenko, the regional and international scenario that Castillo will face will also be a challenging scenario: a global and regional map still shocked by the economic and health crisis of the Covid, a stage of geopolitical transition with friction between the West and the East and their adjacent areas, with a renewed strategic competition between great powers (China vs the United States).

But the Russian scholar and political analyst also pointed out the partners that Castillo could find at the regional level to gain support for his government abroad, with the support of Argentina (Alberto Fernandez) and Bolivia (Luis Arce) a possible new government in Chile, and the opportunity for Lula da Silva (or a candidate with simmilar possitions to Lula) to win the presidential elections in Brazil in 2022. Such a regional scenario could be a great opportunity.

At the end of the event and answering to a a question on what type of government can be expected from a hypothetical Pedro Castillo government, and by carrying out an extrapolation, Iuliia Vaschenko pointed out that such an administration could in some aspects resemble Bolivia during the period of Evo Morales (2006- 2019) with a government action that points to a greater impetus in social protection and a more strategic use of the country’s strategic resources (mainly minerals).